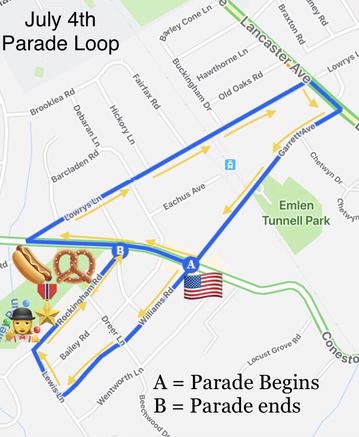 About the July 4th Parade

Where will the parade start this year?

The opening ceremonies will be held at the corner of Conestoga and Williams Rd (Flip and Bailey's) where the parade will start.

When does the Garrett Hill Parade start?
Opening ceremonies of the parade begin at 10:45 a.m. at Conestoga Rd & Williams Rd.

How can I donate money towards the Parade?
The Garrett Hill Parade Committee is currently accepting donations for the parade.  Please click here to learn how to donate.

What time does the Parade end?
Typically, the parade takes about an hour from the time the parade starts to when it ends.